The war in Ukraine will be longer if the UK continues to supply arms to President Zelenskyy’s forces, the Russian ambassador in London told Sky News.

Andrei Kelin told Sky’s Dermot Murnaghan that UK-supplied weapons are now being used to bomb civilians in the donbas region from eastern Ukraine.

He said: “The conflict will end and… it may end very soon because… the UK will understand that there is no chance of winning over Russia.”

“The conflict will be prolonged if the UK continues to supply weapons, which are now also being used to bomb cities and civilians in Donbass and other areas.

“And the more weapons the UK sends, the longer it will take for the Ukrainian authorities… [will] continue the conflict.

Andrei Kelin: ‘There is no chance to beat Russia’

In June, Defense Secretary Ben Wallace said Britain had bought and was refurbishing more than 20 long-range 155mm guns from a Belgian arms company for shipment to Ukraine, but it is not known if they have been delivered. or are being used.

He and other defense ministers have also confirmed that multiple rocket launchers and short-range missile systems will be sent and Ukrainian soldiers have received training in the UK in a variety of weapons..

But Sky News has had no independent confirmation that any of the weapons supplied have resulted in civilian deaths.

Kelin added that the new UK government, when formed after the election of a new Conservative leader, must be realistic in its policy towards Ukraine as “the conflict will not continue forever”.

He denied lying when he told Sky News in January that Russia has no intention of invading Ukraine, insisting that he said only what he knew “at the time”.

He described UK Prime Minister Boris Johnson’s strong support for the Ukrainian government’s attempt to defend itself against the Russian invasion as “completely wrong”.

“It is already clear that Ukraine is losing ground and [we are] gaining ground in Donbas… To me, it is interesting what the UK government’s exit strategy will be if it continues to repeat that Ukraine should prevail. It’s just unrealistic.”

When asked about the war crimes that some of the conservative leadership candidates have accused Russia of committing in the past, he said that it was Ukraine that had been committing war crimes..

he continued: “First of all, we have a record of crimes that were committed for eight years when the Ukrainians bombed Donbas, bombed innocent people there and killed peaceful citizens.

“And they continue to do the same thing now… in Donbas specifically. It continues for eight years. We have this registration and we will apply it.”.

“We have a long history of Ukrainian crimes committed during, after [the] coup there and during the civil war.“ 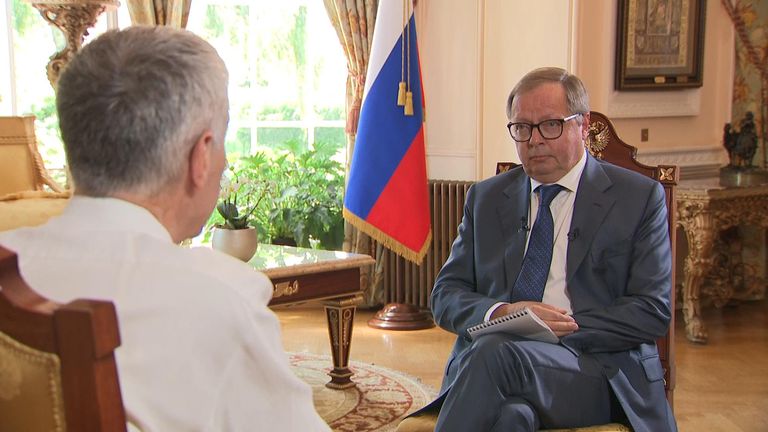 
Despite this, Thursday, More than 40 US and European judicial authorities have agreed to coordinate investigations into alleged Russian war crimes in Ukraine.

On the issue of ships not being able to reach Black Sea ports due to the Russian blockade, he said it was Ukraine’s responsibility to remove mines that prevented the passage of shipments.

His comments came as Russia, Ukraine, Turkey and the United Nations were working on a deal aimed at restarting Ukraine’s grain exports.

Kelin said he was confident an agreement would be reached to allow the bulk carriers to pass.

He said: “Merchant ships will be escorted, I think, and this is now on the negotiating table, but probably [the] The Turks will participate in it. We are setting up a control center in Turkey right now for this.”

Read more:
What will happen in Donbas now that Lugansk has fallen to Russia?
Dancing On Ice pro trains young figure skater who fled war from Ukraine to UK
Calling Vladimir Putin ‘ruler’ instead of ‘president,’ say Russian leader’s allies in Kremlin

Asked if Russia will arm gas supplies to Europe in the fall, Kelin said it was the EU’s decision to reduce its dependence on Russian gas, not the Kremlin’s.

Fears are growing that the current gas shortage could push Europe into a deep recession. whose signs are already emerging.

He said: “This is the European Union that said that by the year 2030, I think, they will totally minimize Russia’s gas, oil and energy consumption and by this year they will end it.

“So they are gradually reducing the consumption of our energy sources.

“Now, of course, we would like to honor all of our contracts… We have a reputation [as a] reliable supplier and we will continue to supply it. But on the other hand, we should also take steps to find some alternatives, because at the moment they’re cutting it down, we need to find other markets for this.”

The full interview will be on Sky News Tonight with Dermot Murnaghan at 8:30pm tonight.