The Senate, the upper house of the French parliament, published its provisional conclusions on Wednesday, 46 days after the main event at the Stade de France, which was overshadowed by crowd problems before and after the match.

Liverpool fans were sprayed with tear gas and the match was delayed for more than half an hour to deal with the crush around the stadium, before the French government’s initial response condemned the red supporters and accused them of arriving with fake tickets.

The Senate report found that the rhetoric masked the failures of the French authorities around the organization of the party and said: “It is unfair to have wanted to hold the supporters of the Liverpool team responsible for the disturbances that occurred, as did the Minister of the Inside”. to divert attention from the state’s inability to adequately manage the crowds present and curb the action of several hundred violent and coordinated criminals.”

The report found that the chaos had been caused by a “chain of events and malfunctions” in the days and hours leading up to the start.

He added: “The implemented systems had significant deficiencies in terms of intelligence (absence of hooligans but presence of criminals in large numbers), transport routes for fans (elimination of a drop-off route around the stadium) and insufficient communication. .

“It is not only in the execution that problems arose. Upstream, the crisis scenarios were not worked out enough and did not demonstrate the necessary flexibility in the face of so many unforeseen events”.

The report’s co-chair, Laurent Lafon, said all senators involved in the investigation agreed with its findings, which he said were caused by a “chain of clerical errors” that allowed all parties involved in the organization of the Champions League final felt they were above reproach in their individual roles.

“The gravity of what happened at the Stade de France shows that many decisions have to be made to ensure this does not happen again at the Rugby World Cup or the Olympics,” he said.

“It is unfair to have wanted to blame the Liverpool fans for the riots as the Home Secretary said. [Gérald Darmanin] has done to divert attention from the state’s inability to adequately manage the crowd.

“There was a need to communicate clearly about the transport of fans from the train station between the chief of police, the French Football Federation and the train operators, but this did not happen.

“We recommend communicating more with football fans and improving the attractiveness of the area around the Stade de France so that people are willing to arrive early.

“We want it to change the opinion of the authorities about football fans, that is a strong recommendation that we are making.”

What happened in the Champions League final?

The star match between Liverpool and Real Madrid at the Stade de France in May was overshadowed by serious problems surrounding the stadium.

Dangerous crowds formed as a result of access problems and police fired tear gas or pepper spray at many fans.

Some of Jurgen Klopp’s relatives experienced the problem first-hand but did not tell the German until later.

French senators demanded last month that the state acknowledge responsibility and identify the culprits behind the chaos outside the national stadium that marred the event.

They also questioned why government officials allowed surveillance video of the scene, in which police pepper-spray fans and families, to be removed instead of ordering it turned over to investigators.

The president of the Liverpool Disabled Supporters Association, Ted Morris, also gave his version of what happened on the day of the Champions League final before the French Senate.

Morris told Sky Sports News: “We arrived at the station at 3pm and it was surprising that there was not a single police officer.

“We headed to the stadium and went to a McDonald’s for three hours. In those three hours, I’ve never seen so many stolen fans in my life, it was one after another. It was absolutely bizarre. That gave us an idea of ​​how this day was going. .

“Then we headed to the soft ticket control area, which just wasn’t fit for purpose. There were local people coming in. I had a conversation with one of our Merseyside Police police officers around 6:15pm and he was extremely worried about the events.

“It was just chaotic. There was no organization, no police presence at the turnstiles to help or even act as a deterrent.”

“I had no interest in the game because, for two hours, I was getting text messages from people at the club and from our disabled supporters about the anguish going on outside, so the game became irrelevant. We could have won 6-0. And I still wouldn’t have cared.

“I was going to leave at half time and I received a message saying not to leave at half time, it’s not safe. So we stayed until the 86th minute, we left the field and the commissioner did not open the door. We had an argument heated and he opened the door because there were still many locals trying to get in.

“We headed towards the tube station called La Plaine. We went under the underpass and there were a lot of police there. When we came out of the underpass, literally within a minute, there were hundreds of locals on our right hand side attacking us. I’m in a wheelchair and he was terrified. 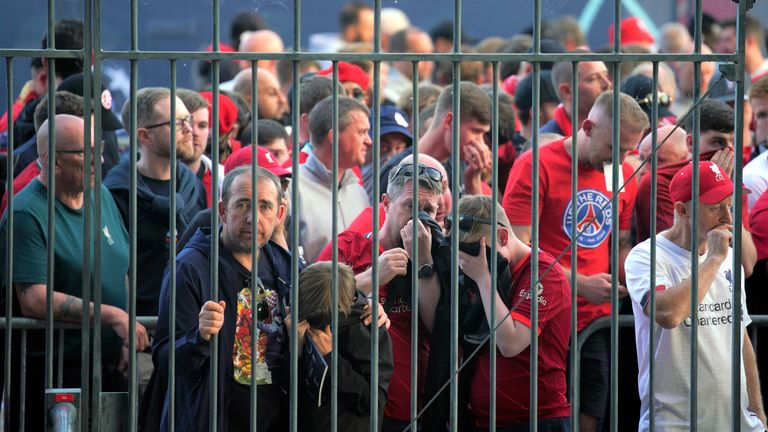 Paris Police Chief Didier Lallement apologizes to Liverpool fans who were at the Champions League final after some were tear-gassed outside the Stade de France.

“It was raining bottles, there were knives, they were running in, assaulting people and running out. And when we finally got to the train station, the police fired tear gas at us. I’ll never understand that, no matter how you try to explain it.

“We went up in the accessible lift to the platform and there was a girl of about six in a Liverpool kit with her father. Her eyes were watery, bloodshot and she was totally and utterly traumatised. All she had done was go to Paris to see a football festival and how she will ever be able to go to a football game or even trust the authorities is beyond me. It was unnecessary and absolutely horrible.”

“This is not just about Liverpool fans, this is about all football fans.”

Speaking on Sky Sports News, John Gibbons of The Anfield Wrap explained how the campaign against the treatment is on behalf of the wider football community.

“You expect to hear about more accountability,” he said. “The citations we’ve been getting from UEFA are a disgrace to be honest with you, so it doesn’t seem like they’re taking any responsibility.

“The blame has been placed on the fans in the same way as the ministers in the French government. I want responsibility and I also want the football fans not to have to put up with what we went through.”

“It’s not about the Liverpool fans, it’s about all the football fans feeling like they can go and celebrate the game. That was in Madrid, it was in kyiv and it should have been in Paris.”

“You want assurances from UEFA that in the future they will make sure it is much smoother and that the fans who have spent a lot of money to be there are treated much better and safer.”

“After what we had been through, we couldn’t really care about the result, and it was a Champions League final.”