A brain drain and inflows of business capital are beginning to take place as Northern Europeans turn to Italy and Spain.

Continuing my tour of Russia and Europe, I am back in Tallinn, the capital of Estonia, for the first time since January 2020, just before the Covid storm. While that has now subsided, the expected gradual resurgence in commerce and life in Northern Europe has failed to materialize. Talking to local businesses here, a notable number of them now want to leave, a worrying sign among smaller nations that are also considered to be on the front lines with Russia.

However, there is a disconnect between local opinions and those of politicians. Much has been made of Finnish and Swedish applications to join NATO, but in Tallinn, the population seems ambivalent. In fact, they say, the number of Russian military personnel and their equipment at the borders has fallen too low for all time: they have been deployed to fight in Ukraine, hundreds of kilometers away. People I’ve talked to also downplay a Russian threat, even off-duty US intelligence seems to think a Russian incursion is unlikely.

Countries like Estonia have long lived with and alongside Russia for decades, becoming independent in 1991. However, the surprising consensus among the many locals I’ve also talked about, along with a handful of Latvians visiting Tallinn, is who want to leave. It is not the Russians that they are so concerned about, they have lived with that for decades, but it is the impact of Brussels sanctions on Russia that they are questioning.

They quote me electricity bills from a small business that in June of last year were €60, this past June, with the same use, that bill is now €540. With the Estonian prime minister resigning, no one knows what the costs or supplies will be this winter, only four or five months from now in a city where temperatures can drop to minus 10 and higher. Meanwhile, inflation hit 21.9% in June. It was 20.1% in May and 18.8% in April. Prices have more than doubled since the beginning of the year, but there is no functioning government in a position to take action.

Another impact, I was told, is that unlike Russia, after independence no real oligarchs descended on the Baltic countries, Russians involved in Northern European business in the early 1990s returned to Russia because the profits they were much better there. The transition from a Soviet economy to a European one has simply not allowed the time frame for large Estonian, Latvian or Lithuanian privately owned companies to emerge. Instead, these nations were considered prime commodity targets by their wealthier neighbors in Western Europe. The Latvian timber industry became dominated by Germany. The car manufacturing facilities were merged with Scandinavian and German brands and later closed. There was little potential for the leading Baltic brands in the EU to develop, become powerful and capable of providing massive employment and developing trade facilities between the Baltic and the EU. Instead, Western EU nations developed them with job benefits and taxable profits that were made in Germany, Finland, and Sweden. 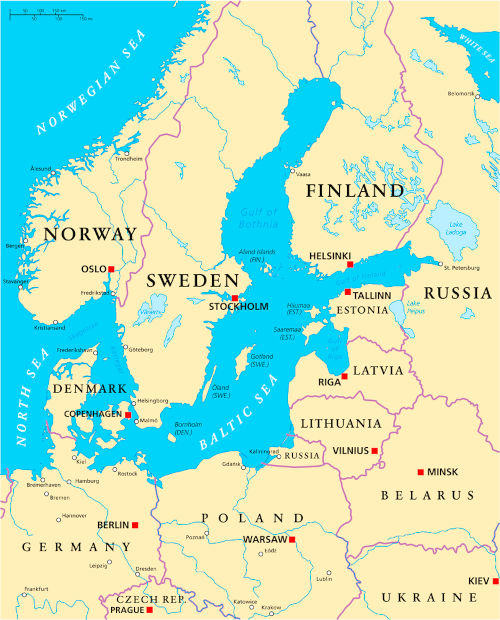 The result? Harsh winters and no guarantees of adequate energy supply mean that nearly all of the 50 Estonians I spoke with make plans to move. Italy is often mentioned, as are Spain and Portugal. My Latvian friends say that this is the same in Riga and Vilnius. There is a desire to leave. Nothing is safe anymore, there are no guarantees and it is getting more and more expensive.

Western and local media are not discussing the issue. As far as they are concerned, discontent is minimal, the EU is ‘united’ and the economic problems are Russia’s fault. However, on the ground, the views expressed to me are that Northern Europe is heading into a dark period.
The once-thriving ports and Russian trade and markets have gone completely offline. That matters in the Baltic countries, where in Estonia, Russian trade had increased by 73.6% in 2021, up to 2,100 million euros. In Latvia, bilateral trade increased by 64% and reached 634 million euros. Lithuania’s bilateral trade with Russia reached 5.29 billion euros and tripled compared to the previous year. All those trading investments to support what were bull markets have completely vanished. What was expected and what had been invested in, has now disappeared.

In Estonia, the ruling government collapsed in June, high-level politicians are trying to compromise and form a coalition, but more than a month later, nothing has happened. No planning takes place.

‘It’s the same in Poland and northern Germany,’ they tell me. Scandinavia too. The ports are running at a quarter or half of their capacity. Shipping costs are much more expensive, insurance rates are astronomical. I can’t get the goods I want. Everything is expensive, winter is coming and no one is planning for it. There is going to be a huge brain drain to southern Europe. We can no longer stay here.”

It is a subject that I had already studied and had to make a decision in April. Our company had plans for January 2022 to establish an office in Northern Europe, and interviews have been held in Sweden, Finland, Denmark and Estonia. Those plans have now been postponed indefinitely, and instead the planned investment from Northern Europe has been made in Dubai.

A small manufacturing company based on Pik Street in Tallinn has the last word: “Brussels imposed it on us as a ‘show of unity’. But if the situation does not change soon, Northern Europe and especially the Baltic countries will enter a deep recession. We will have to lay off all of our local staff and relocate almost everything. At least in Italy we can have heat, it is much less expensive and our business, on which we depend, has a chance to survive.”

EU politicians have gone so far when it comes to Russian sanctions and shutting down all trade and ports that they can’t seem to back down now without looking very foolish and not a little incompetent. The potential result has been a filleting of the industrial heartland of Northern Europe and the dismantling of entire commercial industries, while in countries like Estonia there is not even a viable government to impose any kind of corrective action. Dark days are ahead.

Any views or opinions represented on this blog are personal comments, belong solely to the contributor and do not necessarily represent the views of Asia Briefing Limited or Dezan Shira & Associates.