Detailed plans are finally on the table for the Rotherham Markets redevelopment, complete with a new chapter for a central library.

An £8.9m redevelopment plan recently got underway on the site of Centenary Market, the markets’ home since 1971.

The indoor markets will have a new design and wood-effect ceiling, while the canopy roof of the outdoor market will be replaced. A new dining room with commercial units is a new addition, along with a much better public area.

A new library will include a café, meeting rooms, a flexible gallery space, and a maker space.

New planning documents show that the revamped indoor market will get a new configuration for stalls, replacing the grid pattern to incorporate a main “wish line” to connect the Market Square entrance via links to other floors.

The roof, which suffers from leaks and damp insulation, will be repaired, and some of the glazing will be reduced to prevent the building (and the food on sale) from getting too hot. American Yellow Poplar batten panels will transform your interior appearance.

The plans, produced by Greig & Stephenson Architects for Rotherham City Council, explain: “The refurbishment of the Indoor Market will result in a totally different look, making it more appealing to younger generations and new customers, without alienating customer existing”. base – which together will contribute to its vitality.

“The treatment of the wood will give the market environment a warmer and more welcoming atmosphere and will be enhanced by the painting of the existing primary structure in a dark color and a new layout of the stalls.

“The proposal aims to build around the existing mixed offer and complement it with a dining area on the first floor, which will connect the indoor market with the new covered outdoor market and which could extend the activity of the market outside business hours. market”.

Between the indoor and outdoor markets, plans show that three bays of the existing market wing will be demolished and replaced with a double-height dining area with an industrial look similar to the food stalls at Spitalfields Market in London.

A rest area will be surrounded by six food vendor units and a common kitchen. 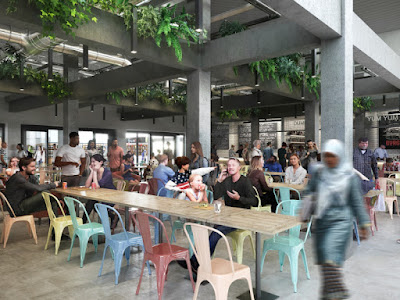 The new open-air covered market is intended to be used primarily as a market, but occasionally for exhibitions and events as well.

The existing stretch fabric ceiling, which only dates from 1997, will be replaced with a lightweight system and wood-slatted ceiling sheathing. This “has had a positive elevation improvement introduced by the new public space and Eastwood Lane.”

Demolition work is being carried out on the Charter Arms pub and the RAIN building, which will be replaced by public spaces in an area called “Market Gardens”, an inclusive space, not only for customers of the market but also for users of the center of the city. The proposals include daring planting areas and terraces that respond to the change in level. Incorporated is the creation of a lower level spill/event space and a variety of seating opportunities. 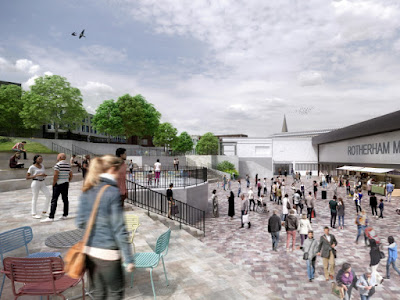 Plans also show that the entrance to Market Square will be clad and lit “to better advertise this destination.” Market Square itself will become a green space, with planting islands accommodating a variety of seating opportunities, new plantings, and existing mature trees.

Store fronts along Howard Street will also be upgraded and the old gaming drives in front of the RAIN building will be renovated to house the Community Center for Citizen Advice.

Plans for the new library, for which the council has earmarked £5.7m, show it will be L-shaped, replacing badly underused commercial units facing Drummond Street and Henry Street. The 1970 Guardian Center building was to be reused but was not suitable for a modern library and was in disrepair.

The council has previously admitted that lending and physical visits never recovered from the slump that followed the transfer of the library’s location from Walker Place to Riverside House in 2012.

The new location and its links to the exchange, Tesco, the university campus and revamped markets “should allow the new library offering to increase traffic and thus usage”.

In addition to the main functions of the library, other aspects of the three floors include a small café, meeting and conference space, flexible gallery space, a business library, free Wi-Fi and computer access, and facilities. of manufacturing space for use by schools and the public. 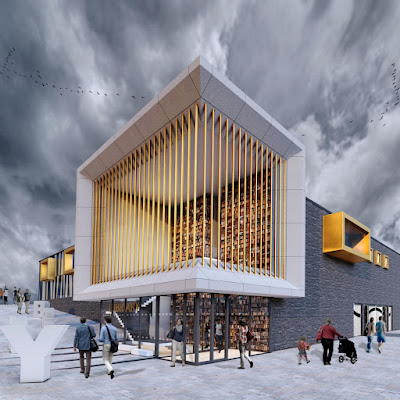 The opaque and translucent glass is designed to create an attractive appearance on Drummond Street with a corner box entrance.

The plans add: “The proposed building will create a vibrant and modern library that will relocate the library to the city center and link with the redevelopment of adjacent new markets and landscaped gardens to form a city center destination for patrons.” of Rothham.

“The intention is to use the combined attraction of the markets, landscaping and library, as well as the adjacent university and other facilities, to create a destination and revitalize this underutilized area of ​​the city.”

Cllr Denise Lelliott, Cabinet Member for Jobs and the Local Economy, said: “The refurbishment will provide an accessible and modern market and library, complemented by a vibrant new dining room.

“The second floor will be renovated to include contemporary office space for charities, social enterprises and volunteer groups. This scheme is another key part of the city center master plan as we seek to create multi-purpose spaces for the people of Rotherham in the heart of their city.”

Funding from the government’s Future High Street Fund was secured by Rotherham Council to partially fund improvements and completion to the markets and library has been planned for 2024.